Loading...
Loading...
It’s been a while since I had a non-chocolate recipe on BoB. Personally, I don’t think there’s any such thing as too much chocolate, but maybe variety isn’t such a bad thing, either. 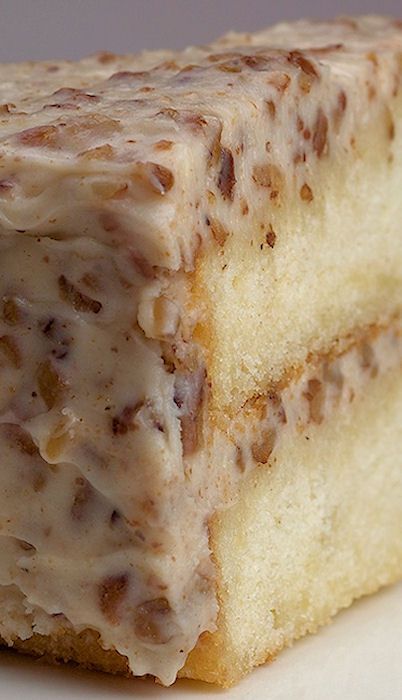 Granted, this cake does have a bit of white chocolate in it, but I don’t count that. White chocolate is an entirely different entity in my book. In fact, I’m not normally a big fan of the stuff. It’s usually far too sweet for my liking. (Did I really just type that?!?) If any recipe can make me change my mind, it’s this one.

TO MAKE THE FROSTING:
Melt 2 tablespoons butter in a large skillet. Add the pecans and cook over medium heat, stirring occasionally, until toasted – about 10 minutes. Remove from heat and cool completely.
Using an electric mixer on medium speed, beat the cream cheese and 1/2 cup butter until creamy. Gradually add the sugar. Beat until light and fluffy. Stir in the buttered pecans and vanilla. Cover and chill at least 1 hour.
TO MAKE THE CAKE:
Place the white chocolate in a bowl and pour boiling water over it, stirring until smooth. Set aside to cool.
Preheat panggangan to 350°F. Grease three 9-inch round cake pans and line with wax paper. Grease and flour the wax paper.
Using an electric mixer on medium speed, beat the butter until creamy. Gradually add the sugar, beating well. Add the egg yolks, one at a time, beating after each addition. Stir in the melted white chocolate and vanilla.
Combine the buttermilk and baking soda. Add the flour to the butter mixture, alternating with the buttermilk mixture. Begin and end with the flour. Mix at low speed after each addition until blended.
Beat the egg whites to stiff peaks. Gently fold into batter. Pour the batter evenly into the prepared pans.
Bake for 20-22 minutes, or until a toothpick inserted in the center of cake comes out clean. Cool in the pans for 10 minutes. Then, remove from pans to wire racks to cool completely.
Spread the frosting between layers and on the top and sides of cake. Garnish, if desired. Store in refrigerator.

This is indeed a 3-layer cake, despite the fact that I only used 2 layers. That just made for a higher frosting to cake ratio!
Read more at https://bakeorbreak.com/2010/01/butter-pecan-cake/#KxgLqvMy6fjHqg9I.99